In my post about the loss of Washington McClain a few weeks ago, I mentioned the Tibiades of François Chauvon. Shortly before Wash’s death, I began preparing a short post about that music, which I’m now offering.

Few details are known about the life of François Chauvon. A Parisian musician who studied with François Couperin, he published a selection of instrumental music and cantatas between 1712 and his death in 1740. He appears to have published another set of ‘pièces pour la flute’ in 1713, four years before the suites known as Tibiades saw the light of day, but so far I haven’t had any luck finding these. If those earlier suites haven’t been destroyed by war, natural disaster or a big plumbing problem wherever they were stored, I hope they’re found one day. If any of you have any pertinent info, I hope you’ll share it!

A page from the second suite

The collection of music called Tibiades is a set of suites for treble instrument and basso continuo, in the tradition of Hotteterre, the Philidors, Dornel and several others. Chauvon’s publication was dedicated to Couperin, harpsichordist and ‘organiste du Roy’ and the composer of much harpsichord and ensemble music from which Chauvon must have taken no little inspiration. On the title page of the Tibiades Chauvon describes them as a ‘new type of piece for the flute/recorder, and the oboe, with some sonatas for the violin’  (‘nouveau genre de pièces pour la flûte, et le hautbois, avec quelques sonates pour le violon’). In choosing to call his suites by the name Tibiades he’s clearly harkening back to antiquity – the tibia was a bone flute – and to the mythology of ancient Greece and Rome, with which all educated eighteenth-century Europeans were very well acquainted.

In the body of the Tibiades there are no specific indications of which suites might be meant for which instrument(s), but a simple examination of the key signatures and ranges of the treble part gives a good basis on which to make your decisions. The Tibiades are all playable on the traverso, oboe and violin, though some keys suit one instrument more than the others. The range of many of these suites also makes them playable on the alto recorder without having to resort to the usual transposition described by Hotteterre (up a minor third). Here’s a movement from the fourth suite:

However, there’s no need to limit your orchestration just because you see only one treble and one bass part. Varying the instrumentation from movement to movement is fun, as is doubling up, and entirely appropriate from a historical point of view. One very clear example of employing a variety of instrumental colours comes from François Couperin, in his description of the first performances of his Concerts royaux at the French court in 1714-15. In the preface to the published edition of the Concerts royaux, Couperin tells the reader that these pieces were played by himself, the violinist Duval, one of the woodwind-playing Philidors, the bassoonist Dubois and the violist da gamba Alarius. Since most of the pieces in question have only one treble line with a figured bass part – an occasional second treble part is occasionally included – this group of the King’s musicians might very well have traded off or doubled their parts as they played, for variety’s and expediency’s sake. Here’s an example of multiplying voices on the treble line, in Chauvon’s tenth Tibiade:

Couperin also says one can play the music as solo pieces for harpsichord, which works very well with certain of Chauvon’s tunes too. Here is Charlotte Nediger’s rendition of a movement from the first Tibiade.

And here, since I can’t find a picture of Chauvon, is one of his teacher: 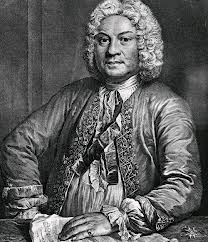 The Tibiades are charming and elegant little suites, well worth exploring. You can find a facsimile edition for purchase at Anne Fuzeau’s on-line shop:

And the CD from which these sound clips are taken can be found at: