Benjamin Britten (1913-1976) played the recorder!? I had no idea until my friend Frances sent me a link with this photo on it. Shame on me. 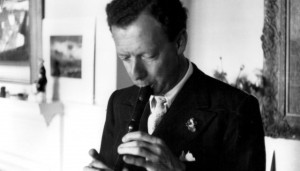 And not only did he play recorder, having been persuaded to give it a shot by his friend and colleague Imogen Holst, but from 1958 to 1976 Benjamin Britten was the President of Britain’s Society of Recorder Players.

Britten wrote a few pieces for or involving the recorder: Scherzo (1954), for recorder quartet (SATB); Alpine Suite (1955), a diminutive trio for a friend who broke her leg skiing in Zermatt (SSA); and there are recorder parts in two operas: Noye’s Fludde [Noah’s Flood]  (1957); and A Midsummer Night’s Dream (1960).

Noye’s Fludde is based on one of the 15th-century Chester Mystery plays, and was designed to make use of many levels of musical skill – it’s a very community-oriented piece, a musical manifestation of ‘it takes a village…’  First presented in Britten’s home base of Aldeburgh (Suffolk) in 1958, it has had hundreds of performances around the world since then. Scored for a big cast – as many children extras as you can find for the animals of the ark! – it calls for adult solo singers, a children’s choir, and some younger soloists; a professional-level string quartet, recorder soloist, percussion, keyboard; and a student string orchestra, student recorder group, and so on – and a conductor, one with immense patience, unflagging enthusiasm, and no fear whatsoever. True, projects like this are a bit of a nightmare to organize, but they are completely worth the trouble. This kind of show provides the wonderful but fairly rare opportunity for younger musicians to work with professional singers and players over the whole production period; and it offers a dose of ‘get real’ for the pros, who may spend a lot of their working life in a more rarified concert atmosphere…Everyone’s horizons get broadened, and it’s brilliant.

I’ve been involved in two Noye’s Fluddes, with the Toronto Symphony under Andrew Davis and at the Guelph Spring Festival under Simon Streatfield. Both projects were inspiring, heartwarming, and worth every moment of the lengthy rehearsals required to get everything working. There was also a very high Cute Quotient once the smaller members of the cast got their costumes on.

You’ll get an idea of what I mean by those last two remarks if you take a look at this excerpt from a Canadian production of Noye’s Fludde, filmed by the CBC. Stay to the end and you’ll hear the solo recorder accompanying the dove, as she flies out from the ark and returns with an olive branch. The recorder player is Avery MacLean.