In the unpredictably varied world of the freelance musician, the background music gig is often a staple of one’s experience and one’s bank account. Most of us have played at least a few of these, and some people make much of their living by playing them, the most common of which mark life’s typical rites of passage: weddings, funerals, birthday and anniversary parties, and such.

Some background music jobs are very fancy and rare: I have a colleague, for example, who played at Barack Obama’s first inaguration. Then there are the other, less impressive inauguration jobs, like when I played for the opening of the new subway station near my family’s home. Yes I did. But I’ve played in Carnegie and Roy Thomson Hall too, and it’s worth sharing that the acoustics in the subway station were better than at Thomson Hall, that is until the latter was renovated.

At some background gigs you spend a bit of time playing for people who listen to you, during a wedding’s register signing for example, but the rest of the time on the job is spent providing ‘wallpaper’ music for meals, receiving lines, arrivals and departures. Sometimes you spend the entire time noodling your way – almost inaudibly once the party’s in full swing – through your own gig book of tunes, or through one of the many published collections with names like Wedding Classics or The All-Occasion Fake Book. This can sometimes be tedious, it’s true, but if you’re fascinated with human social behaviour, have some new music you want to try out without necessarily being heard, and/or you get free food and wine as well as getting paid, it’s kind of fun!

But there are other more uncommon rites of passage, about which many of us have never had much reason to think. One of the most unusual jobs that I’ve ever played was for a Canadian citizenship ceremony. That’s not a gig that comes along very often, and perhaps not at all these days, but if you’re ever asked to play at one, I recommend accepting the offer. It’s an honour. For a brief while, your life connects with those of complete strangers who meet to celebrate a big decision, and they are all strangers to one another too.

I had no idea of what went on at citizenship ceremonies, apart from people perhaps taking an oath and receiving citizenship certificates, and I certainly never gave any thought to whether or not live music might be included in the event. But when I got the call, it seemed like a unique opportunity so I accepted, and on the appointed day I trundled by public transit out through deepest and most spacious suburbia to the Scarborough Town Centre shopping mall and civic offices. This was prior to 1998, before the city of Toronto was amalgamated with several outlying boroughs, a union rejected by a majority in a referendum of city and borough citizens, but rammed through by the provincial government of the day. Here’s the Scarborough Civic Centre, designed by architect Ray Moriyama. 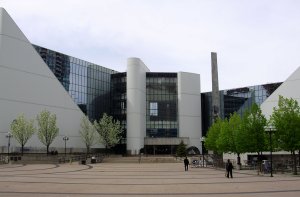 At this point my memories of the ceremony’s exact details aren’t great, but what I very clearly remember was a wooden-walled courtroom filled with people from all around the globe. There were families, couples and individuals, and their friends and relatives. Their countries of origin were listed in the opening remarks made by the Justice in charge, and these included places like France and New Zealand but also many countries known more for civil war, famine, poverty, genocide, religious strife or suffering of so many other kinds. I wondered what each of these new Canadians had lived through prior to arriving in this tastefully lit courtroom in Scarborough, how they’d gotten here, what they’d left behind or given up.

It was certainly moving to to watch all these people parade to the centre of the room to receive their citizenship papers and a congratulatory handshake, and to hear them sing the national anthem, some exuberantly and some a bit more shyly. As in a graduation ceremony, for each person it marked the end of a lengthy journey, though the challenge of some of their journeys would likely have made medical school seem like a walk in the park.

As for my contribution to it all, I played at the usual moments – some music while people arrived, some tunes during the certificate distribution, and something perky when it was all done. I can’t recall exactly what I played but I’m pretty sure some Telemann, van Eyck and some Scottish folk tunes made it into the mix. Very likely it wasn’t music that anyone in the room would have expected, if they’d expected live music at all. Even so, people listened, and afterwards several of them thanked me for the gentle wooden flute sounds that added an unexpected special something to the proceedings.