Many recorder players will recognize Daniël Brüggen’s name either as a member of the celebrated but now-defunct Amsterdam Loeki Stardust Quartet, a teacher at the Royal Conservatory of The Hague, and/or as the nephew of Frans Brüggen. What’s perhaps not so generally well known is that in recent years he’s expanded his artistic horizons to include filmmaking, producing various documentaries as well as shorter classical music videos for the Royal Wind Music, Zefiro, l’Armonia Sonora and various others.

One of his recent works is Ricercata, a quite beautiful documentary on the recorder which is available on DVD (2011, MusicFrame Films). Like the Renaissance musical form for which it’s named, Ricercata explores a particular musical motif from various angles, lightly but attentively touching upon the recorder’s character, history, music, symbolism, construction, reputation and its role in education through visits with people, players, makers and others. If you’re a recorder enthusiast, or you’re looking for a gift for someone else who is, this could be just the thing (link provided below). 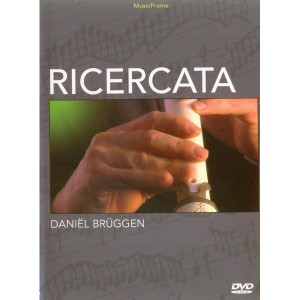 The film opens with Daniël Brüggen’s visit to recorder maker Bob Marvin in rural Québec, and then to the Yamaha factory in Japan which turns out 80,000 plastic recorders a year – a thought-provoking juxtaposition between a most individualistic, independent and celebrated maker and a finely-honed producer for the collective, both of the highest standard and greatest devotion to their task. Then on to Seoul and a rehearsal by an exemplary recorder ensemble from South Korea’s highly successful school music programs; then to the Dordrecht Museum, where we meet the oldest extant recorder known to us (dating from the late 14th/early 15th century); and then to Barcelona where some of the recorder’s symbolism in Renaissance painting is explored with art historian Romá Escalas. Brüggen then spends some time ‘talking recorder’ with his uncle Frans at the latter’s holiday home in Tuscany, a conversation which until the filming had never taken place, even despite a familial and instrumental connection.  Daniël closes the film by playing an Ortiz recercada on a glorious-sounding 16th-century ivory tenor recorder in Kloster Wienhausen.

The film is a personal exploration of the ‘soul’ of the recorder by the man behind the camera, a man who has spent so much of his life with the instrument. It’s fascinating, touching, and thoughtful. Many insightful observations about the recorder are made here: particularly resonant for me were those from Bob Marvin, Mrs. J.S. Lee of Seoul, and (no surprise here) Onkel Frans. Those of us who feel the recorder is really ‘our’ instrument, for better and for worse, will find community, comfort and inspiration here. The chats with Bob and Frans alone make this film worth a viewing; and the cinematography is striking, whether it’s of Bob’s workshop in the woods and his attempt to dismantle a beaver’s dam, the neon-lit bustle of Tokyo’s main streets, or a cabbage white butterfly (that ancient symbol of the soul) in Tuscany’s beautiful afternoon light.

I referred to this film in an earlier post about recorder maker Bob Marvin, and included a Vimeo link to an excerpt from Ricercata. Here it is again, to pique your interest: http://vimeo.com/vicenteparrilla/bob-marvin-interview

Ricercata is 37′ long, is in Dutch (and some English) with English/German/Spanish/Korean/Japanese subtitles, and is playable on North American players. Should you be interested in getting a copy for yourself, go to http://www.orpheusmusic.com.au/lizard-postcards/6934-ricercata.html. If you can’t get one for yourself, ask your local public or university library to order it!

And if you want to see Daniël Brüggen do another visit with a few tenor recorders, go here: http://www.youtube.com/watch?v=y704rV2yf9U