Many recorder players will recognize Daniël Brüggen’s name either as a member of the celebrated but now-defunct Amsterdam Loeki Stardust Quartet, a teacher at the Royal Conservatory of The Hague, and/or as the nephew of Frans Brüggen. What’s perhaps not so generally well known is that in recent years he’s expanded his artistic horizons to include filmmaking, producing various documentaries as well as shorter classical music videos for the Royal Wind Music, Zefiro, l’Armonia Sonora and various others.

One of his recent works is Ricercata, a quite beautiful documentary on the recorder which is available on DVD (2011, MusicFrame Films). Like the Renaissance musical form for which it’s named, Ricercata explores a particular musical motif from various angles, lightly but attentively touching upon the recorder’s character, history, music, symbolism, construction, reputation and its role in education through visits with people, players, makers and others. If you’re a recorder enthusiast, or you’re looking for a gift for someone else who is, this could be just the thing (link provided below).

The film opens with Daniël Brüggen’s visit to recorder maker Bob Marvin in rural Québec, and then to the Yamaha factory in Japan which turns out 80,000 plastic recorders a year – a thought-provoking juxtaposition between a most individualistic, independent and celebrated maker and a finely-honed producer for the collective, both of the highest standard and greatest devotion to their task. Then on to Seoul and a rehearsal by an exemplary recorder ensemble from South Korea’s highly successful school music programs; then to the Dordrecht Museum, where we meet the oldest extant recorder known to us (dating from the late 14th/early 15th century); and then to Barcelona where some of the recorder’s symbolism in Renaissance painting is explored with art historian Romá Escalas. Brüggen then spends some time ‘talking recorder’ with his uncle Frans at the latter’s holiday home in Tuscany, a conversation which until the filming had never taken place, even despite a familial and instrumental connection.  Daniël closes the film by playing an Ortiz recercada on a glorious-sounding 16th-century ivory tenor recorder in Kloster Wienhausen.

The film is a personal exploration of the ‘soul’ of the recorder by the man behind the camera, a man who has spent so much of his life with the instrument. It’s fascinating, touching, and thoughtful. Many insightful observations about the recorder are made here: particularly resonant for me were those from Bob Marvin, Mrs. J.S. Lee of Seoul, and (no surprise here) Onkel Frans. Those of us who feel the recorder is really ‘our’ instrument, for better and for worse, will find community, comfort and inspiration here. The chats with Bob and Frans alone make this film worth a viewing; and the cinematography is striking, whether it’s of Bob’s workshop in the woods and his attempt to dismantle a beaver’s dam, the neon-lit bustle of Tokyo’s main streets, or a cabbage white butterfly (that ancient symbol of the soul) in Tuscany’s beautiful afternoon light.

I referred to this film in an earlier post about recorder maker Bob Marvin, and included a Vimeo link to an excerpt from Ricercata. Here it is again, to pique your interest: http://vimeo.com/vicenteparrilla/bob-marvin-interview

Ricercata is 37′ long, is in Dutch (and some English) with English/German/Spanish/Korean/Japanese subtitles, and is playable on North American players. Should you be interested in getting a copy for yourself, go to http://www.orpheusmusic.com.au/lizard-postcards/6934-ricercata.html. If you can’t get one for yourself, ask your local public or university library to order it!

And if you want to see Daniël Brüggen do another visit with a few tenor recorders, go here: http://www.youtube.com/watch?v=y704rV2yf9U

It’s been almost exactly two months since Frans Brüggen died. With his passing, an incandescent light of the early music world went out, though the deft touch and inspiration he gave to so many musical projects, musicians and music lovers will abide for a very long time. It has taken me an inordinate amount of time to write this small tribute to one of the most influential musicians in my life. Simply put, words failed.

Frans Brüggen was an extraordinary musician whose medium in the earliest part of his career just happened to be the recorder. In this, he was an inspiration to the rest of us who play it, not only for his radiant musicality but also because he put the instrument on the map without affectation or defensiveness. He didn’t seem to feel he had to prove anything – in his own inventive, elegant and committed way, he just made this simple-looking pipe sing and, in so doing, persuaded many who had previously doubted it that yes, in fact, this instrument could be just as musical an instrument as any other.

And when he’d had enough, which he described as ‘recordered out,’ Frans moved on to new Career and Personal Growth Opportunities. In this, too, he set a fine example: when you feel you’ve conveyed all you can through one artistic channel, switch it and move on. When you’re done, you’re done, and there’s no need for regret, no cause for shame. New discoveries and unexpected joys await! 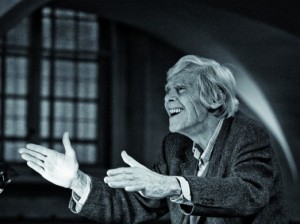 Before I heard Frans, the first recorder player to impress me was a Danish woman named Irmgard Matthiesen, whose recording of Telemann sonatas I got when I was 13 or so. Her ornamentation of one particular sonata’s first movement was so gorgeous that I memorized and reproduced it every time I played the piece. When I finally decided I really ought to make up my own version, it felt like cheating on Irmgard. I wore out the grooves on that LP; the only disc more ‘played’ out in our house was the one accidentally destroyed by my younger cousins, who ran over it with the patio chaise-lounge.

But it was Frans’s playing which utterly blew me away. He was many notches more amazing than Irmgard, and his conquest was complete and everlasting. I first encountered him through the boxed LP set entitled Frans Brüggen and not very creatively subtitled, Frans Brüggen spielt 17 Blockflöten – because he played seventeen original 17th– and 18th-century instruments on the recording. What a revelation and inspiration it all was! Though I couldn’t have described it this way at the time, it seemed that the ideal alchemical balance had been struck between player, instrument and music, like some perfect artistic cocktail. I don’t remember exactly what music I first heard him play, but I remember Telemann fantasias and van Eyck sounding better than I could ever have imagined. I’m quite certain that his rendition of Andrew Parcham’s Sonata in G influenced my ongoing fascination with lesser known repertoire: Frans brought this eccentric little piece wholly to life, proving beyond any doubt that some respectful, inventive co-creation with a less familiar composer could produce quite fetching results.

Anyway, I bought all of his recordings and I listened to them incessantly. I still have them, in all their LP glory, as well as some of the reissued CDs. Plus, I got – and still have – The Poster, which was popular and amusing proof of the Rock Star status Frans had in the classical music world. The record company marketers capitalized on his sultry good looks by putting large photos of him on the front and back of the packaging, several more in the booklet, and a HUGE poster in the box. I didn’t actually ever put it up on my wall because frankly, it was so big it was scary; but from time to time, I’d take it out of the box and stare at it in adolescent, recorder-geeky rapture. After Frans died, I was pleasantly surprised to see that I still have it, as the evidence shows:

Over the years, I met this unwitting mentor three times. In Toronto for a visit between my years of study in Basel, I went with my former teacher Hugh Orr to hear Frans in recital with Anner Bylsma and Gustav Leonhardt. I don’t recall them cracking even one smile onstage during the entire show, but they were captivating and utterly inspiring nevertheless. Hugh and Frans knew one another and, after the backstage greetings following the show, we were invited along for a meal at a swanky Toronto bistro. I spent the evening feeling simultaneously delighted and totally out of my depth, eating shrimp cocktail (not exactly a staple at home) and sitting across the table from this internationally famous musical hero of mine, who seemed to be a friendly, intelligent and interesting person, without arrogance or pretense. He also tried out the new Rudolf Tutz traverso I’d just brought back from Europe, which I hadn’t had a chance to show to anyone else who knew Baroque flutes. After several tootlings he pronounced it ‘very, very good,’ and asked me for the maker’s contact info. I was over the moon for weeks.

He must have had a remarkable memory for names and faces, given how many hundreds of them he must surely have met, because a year later he remembered me during his visit to the Schola in Basel, where I was still studying. And a few years later, knowing I’d be a fool not to take advantage of the opportunity, I signed up to play in a rare master class he’d agreed to give during another Toronto visit. It was a last chance moment: if he hadn’t already quit teaching by that point, he was very close to doing so. The insightful comments he made about Anne Danican Philidor’s Sonate pour la flute à bec were exactly what I needed to hear, and the quiet, unnecessary compliment he gave me afterwards has continued to be a radiant little beacon in darker, uncertain times since then.

I had a dream a few years ago, a vivid dream in which Frans was a central figure, and which echoed the ambivalence I was feeling about my musical life at the time. The dream has resurfaced in consciousness several times since then, and it popped sharply back into memory when I learned that Frans had died. It was set outside Humbercrest United Church, a popular Toronto recording venue in an east end neighbourhood. Frans was sitting in the back of a large black limousine parked in front of the church, waiting to go to the airport. I approached the car, the rear passenger door opened, and as I leaned in to say goodbye, Frans said I was very welcome to join him if I was heading to the airport too. For a second I wanted to take him up on the offer and just head away, anywhere, but it became clear that I needed to stick around a bit longer, so I declined. Sitting there in the limo, Frans looked very old and frail, and it was obvious that he was unwell (which I’d heard was indeed the case in the ‘real’ world). In the dream, as I wished him a good trip and shut the limo door, I also knew quite clearly that I wouldn’t be seeing him again. It was a bit spooky when, in the days following his death, I inadvertently came across this photo on the web:

Smooth travels, Frans, and thank you for everything.

Well, shame on me. It’s been a very busy few weeks so although I’ve had some intriguing musical work, it’s been very hard to find time for writing about it. But in the meantime, here’s something seriously worth a listen/look: Frans Brüggen as a young man, putting Telemann fantasias and the recorder on the map.

I ask you, where would we be without YouTube?