I’ve been thinking a lot lately about the relevance of old music, Baroque music in particular. If it’s music that’s truly relevant in modern life, then what it expresses will resonate with other forms of artistic expression from today’s world. So I’ve begun exploring the combining of Baroque music with non-Baroque imagery, and here’s the first offering. My partner Colin Savage is a photographer and musician, and for many years now he’s been taking shots of abandoned, demolition-slated, decommissioned and otherwise ‘doomed’ buildings, using a Twin Lens Reflex camera (i.e., using a historical instrument to take photographs of old places…) as well as shooting in digital format. He put together a slideshow to a couple of tracks from a CD of mine. See how it strikes you. There’s more info on the music and the photos below.

Late 17th-century London was a thriving, cosmopolitan, artistically busy place where much music for the recorder was composed and played. Perhaps the most celebrated exponent of this activity was Jacques Paisible. Born in or near Paris to a family with members in the employ of Louis XIV, he had moved to London by 1675 when he was mentioned as a player of oboe and recorder for a production of the masque Calisto at Whitehall. Also known as James Peasable or Pesible, he played ‘bass violin’ in James II’s Roman Catholic Chapel, served as court composer for Princess/Queen Anne and after her death, played bass in the Drury Lane and Haymarket Theatre bands, played recorder in public concerts and theatre intermission entertainments, and was one of the first recorder teachers of the Royal Academy of Music at its founding in 1695.

A much-admired virtuoso player on the London scene, Paisible’s numerous recorder sonatas and suites remained unpublished during his lifetime. Though he spent most of his working life in England, his music is decidedly French in its style and conceit; that said, several of his fast movements demand far greater fleetness of fingers than your average French suite. Then again, some of his other sonatas aren’t very technically demanding, so there’s also something for players who want less of a challenge. I enjoy Paisible for his changeability and occasional eccentricity, and if like me you appreciate off-the-beaten-track music which makes demands on your interpretive and expressive skills, with a few bat-shit crazy movements in awkward keys thrown in every once in a while, you’ll make a new friend in Jacques/James.

One of Paisible’s non-musical claims to fame was his marriage to Moll Davis, a celebrated actress and a mistress to Charles II before she settled down with Jacques/James. I couldn’t find a picture of Mr. Paisible, so here’s a painting of his  charming wife by Peter Lely. She was apparently a strong and independent-minded woman, not an easy thing to be in seventeenth-century London. Or now, for that matter. 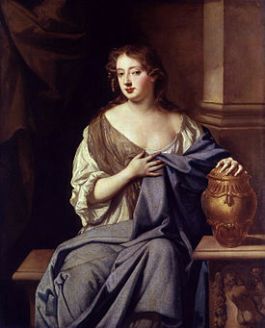 Several of Paisible’s suites and sonatas were edited by Marianne Metzger for Dolce’s series The Delightful Companion (two volumes, DOL 250 and 251).

David Lasocki has also recently released e-editions of previously unpublished duets, sonatas and suites by Paisible, which are available at

There are several recordings out there featuring at least a little of Paisible’s recorder music. His Sonata VI is on the program of The Business of Angels, a CD of English recorder music from the turn of the 18th century which I recorded in 2010. This sonata comes from a MS in the collection of the Bibliothèque Nationale in Paris (Solos de Mr Pesible) and is thought to have been composed around 1695. Here’s the fourth movement, a Presto. 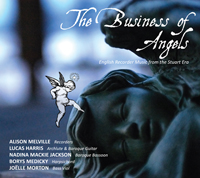